[Updated] Want to disable Tab Groups in Chrome on Android? Here’s how


The following video summarizes this article:

New updates are being added at the bottom of this story…

There appears to be a recent server-side update on Google Chrome browser for Android following which the tab-view has been completely altered for many.

Previously, tabs used to appear in a vertical cascading list of cards that spanned the entire length of the screen. This view only allowed previewing one site at a time.

But after the update, tabs now appear in a grid layout allowing several opened sites to be previewed at once without getting obscured.

This change also opens up an avenue for Tab Groups support – something that wasn’t possible earlier. Tab Groups facilitate smoother work-flow as tabs can now be organized into neat little assortments.

This is especially useful for power users that keep dozens of tabs open at once. With the change, it will be much easier to find them if there is a large number open at once.

However, there are a couple of downsides to the update too. One-handed usage has become a tad more difficult as tabs are now placed at the top of the screen rather than being aligned to the center. Also, there are many that simply do not like how the grid layout looks.

And while it’s debatable if the changes are for the better or worse, it’s quite clear that most have already made up their minds.

There have been plenty of complaints from angry users asking for the update to be rolled back. Many are also asking for a way to disable the tab groups and grid layout on Chrome. This is an annoying feature. And it doesn’t even ask if user want to enable it. Chrome devs become worse day by day. It causes many problem for my company when using our web apps with chrome, such as showing update popup randomly, breaks old features, and now this.
Source

If you are one of such users, then there indeed is a way to change the tab view in Chrome for Android back to its previous state. And it involves Chrome Flags.

Chrome Flags are experimental features that aren’t yet enabled by default but can be with just a few clicks. They’re simple to use and can transform your browsing experience.

Similarly, there is a switch for the new tab grid-view as well under the list of available flags. To access it, you need to enter chrome://flags into the Chrome address bar.

You will then be directed to the flags page. Next, enter the words “tab grid” in the search bar following which you should see the desired flag show up just like in the below image.

Simply select it and change its value from ‘Default’ to ‘Disabled’. After this, restart Chrome a couple of times to see the grid layout revert to the good old vertical card view once again.

Furthermore, if you also want to disable tab groups on Chrome, just to be sure, then the #enable-tab-groups flag should help you with that.

12:27 pm (IST): As per a Product Expert on the Google forums, it now seems that the option to disable group tabs via Chrome Flags has stopped working.

Seems like this flag was removed and this new feature is now by default, without an option to disable it.
Source

While we were unable to verify this, it could be possible that it actually is a server-side change and has been put into effect for select users only. If true, it’s highly disappointing.

11:12 am (IST): As per several Redditors, the grid layout/tab groups UI appears to now have been rolled back on Chrome. A great relief indeed, but there is still no telling if Google might bring it back. 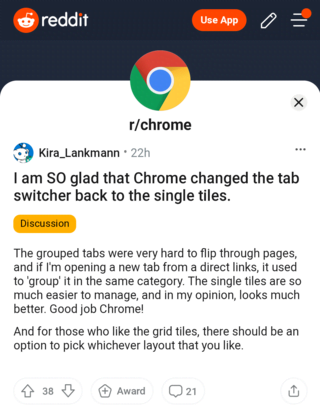 After all, it could be quite possible that the rollback was initiated due to unmentioned bugs. Anyway, for now, it is advisable to find any Chrome flags that include the word ‘group’ and disable them.

Today, there’s only one official way to play Google’s Stadia game streaming service on your 4K TV — the...

Coming in 2021 The next character to join the roster of Skullgirls 2nd Encore and Skullgirls Mobile is none...

Huh, The New Fable Runs On The Forza Engine

Image: Xbox Game Studios / KotakuThe next installment in the Fable franchise is being built with the ForzaTech engine,...

Graphic: SignalA series of Instagram ads run by the privacy-positive platform Signal got the messaging app booted from the...

Nintendo is considering delving into animation projects beyond the previously announced Super Mario animated movie.In a recent interview between...

Save $20 On First-Party Nintendo Switch Games In Rare Sale

Nintendo rarely cuts the price for its own games on Switch, as they'll continue to sell without needing sales...